As I mentioned in my first post, most subsequent postings will be few and far between, but I just had to show SOMEBODY my recent acquisition…’cos it’s got me positively beaming!

As I’ve mentioned, I’m a bit of a slave to 1/72-ish miniatures, heck, I’ve loved them since I was a kid! I’ve also been in love with superheroes, being a comic book geek since…since…well, since comic books sold for less then a dollar!

The thought of combining the two loves has been on my mind since I discovered gaming, and the early superhero miniatures were a bit chunky, but almost compatible…sadly, just not enough for my discerning eye.

As much as I love lead, I’m really gaga over plastic, so when Heroclix came on the scene, I did force myself to have a peek. As cool as they are, I couldn’t see changing my scale preference, or jumping into collecting where you’ve got to blindly purchase the minis.

Then Zerboz (or Heroics, as they were initially called), reared their beautiful plastic heads…

Some Series One Supers…

So I trawled my way through E-Bay until I found a good source for purchasing the lot – both series one and two…and then the company quit making them, totally squashing my hopes of obtaining my  most favorite supers.

UNTIL…a blogger by the name of  Bunkermeister spilled the beans that the out-of-production Marvel Battle Dice were roughly (depending on the figure) 1/72 scale as well!

I was back in business.

So, trawling E-Bay once more, I came across two amazing lot deals and, Viola!

A mix of my Zerboz and Marvel Battle Dice jackpot! (Pardon my conversion notes)

And despite the fact that most are Marvel Comics characters, they are doozies! 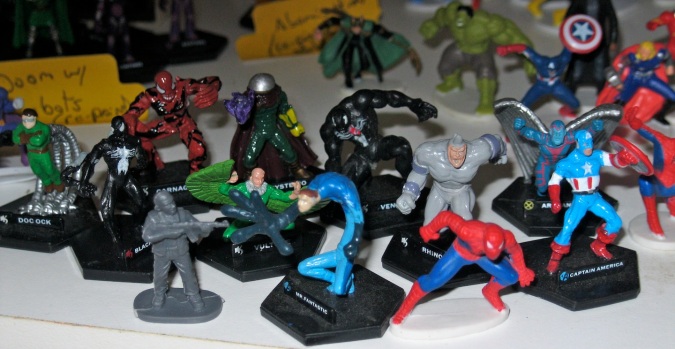 (Check out the Caesar mini thrown in there for size comparison) 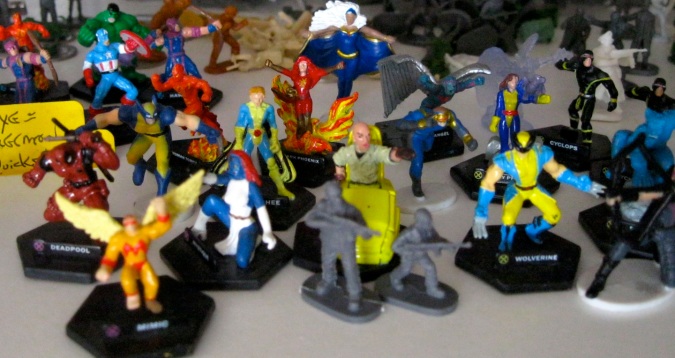 Now I’ve about a hundred or so figures to re-base, re-paint, and convert where necessary. It’s all a bit exciting in 172Fixer’s world at the moment. Last year I started building an appropriate city for Zombie infestation. Now it looks like it may be the sight of a few super-villain incursions…only time will tell, right?

6 thoughts on “Is it a bird? Is it a plane? Is it my overwhelming love of superheroes?” 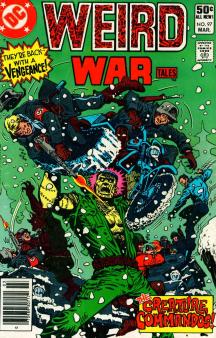 The Art of Paul Bennett
Writeups.org

Rantings from under the Wargames table

by The Ministry of Gentlemanly Warfare

Building, Converting and Painting miniatures for you.

A fantasy war gamer grumbles into his beer.

Because the new world order demands everyone to blog

Rafa " Archiduque " Miniatures Painting Studio
You And What Army?

an occasional blog about miniatures

Surveying the Gen X landscape and the origins of geek

A loft full of lead

At the Mountains of Lead

Three Wargamers on a Never-Ending Expedition

The View from the Turret

the best of wargaming and military history

In Her Majesty's Name!

by The Ministry of Gentlemanly Warfare

The adventures of a grown man and his toy soldiers

A game designer's view of gaming

a blog about gaming, painting and modelling.

Conflict in the imaginary world of 1891 and later

His Grace, The Duke of Plaza-Toro's wargames blog

a wargaming blog (plus some other stuff)

The home of rather fine vignettes

Recording adventures in miniature painting by an semi-talented painter whose skills are not as good as he would like them to be...

Creating your world....one building at a time